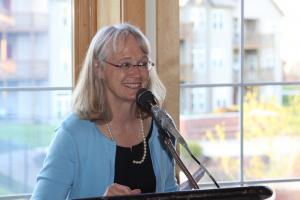 Why did you decide to start the CASA Program in Monroe County and what was that process like?

Frances Hill: In 1980 I was appointed by Monroe County Circuit Court Judge James Dixon to serve as the Juvenile Referee hearing all cases of Juvenile Delinquency (status acts and crimes by persons under 18) and civil child abuse and neglect cases referred to as Child In Need of Services (CHINS) cases. It was a natural fit for my interests and passions. Prior to that, I studied sociology and education at Purdue, worked in Whitley County as a child welfare worker, and completed IU law school.

The 1980s were an exciting and challenging time in Indiana family and juvenile law. The judiciary was still reviewing the 1974 federal Child Abuse and Prevention Treatment Act (CAPTA) requiring the appointment of Guardians Ad Litem for children as a condition to federal funding. Indiana had recently revamped its juvenile code, creating greater protections for children and parents, including the Guardian Ad Litem concept to advocate for the best interest of children, separate from the Department of Welfare.

Eli Lilly and the Indiana and National Bar Associations were watching model programming for child advocacy develop on the west coast. This programming utilized non-lawyer volunteers (called Court Appointed Special Advocates-CASAs) to research and advocate for the best interest of children in juvenile court cases. This was new stuff. The use of volunteers made child advocacy more affordable, but there was no track record for how volunteers would fair in our legal system and no system in place for funding or program development. About this time, Becky Pryor and attorney Derelle Watson Duvall created the not-for-profit Indiana Child Protection Program, which morphed into the Indiana GAL/CASA Association and eventually Kids Voice, to help counties develop child advocacy programming. The Program made mock trial presentations to local communities, and distributed training materials and the “best interest of the child” videos to guide in the development of CASA programming. The League of Jewish Women facilitated the development of volunteer child advocacy programming in Marion County, and a few other juvenile courts in Indiana began laying the foundation for CASA and Guardian Ad Litem programs.

Monroe County was ripe for child advocacy programming. As the Juvenile Referee I joined with then area Judges Linda Chezim (Lawrence County), Frank Nardi (Owen County), and James Harris (Morgan County) to address issues raised by Indiana’s new juvenile code and the challenges of the early phases of the new Monroe County Youth Shelter. I joined the statewide Juvenile Judges Bankbook Committee and was exposed to the new volunteer child advocacy programming that was in the air. Foremost, I experienced in my courtroom the need for someone to advocate for children independent of the Welfare Department (now the Department of Child Services-DCS). The county was struggling financially with increasing costs of residential placements for children and seeds were planted for the eventual state takes over of welfare costs. This would mean the positives of statewide child welfare standards and administrative oversight, but would also bring loss of community autonomy for our welfare programming and an increasing need for child advocacy independent from state government.

Although the facts above set the stage for development of the Monroe County GAL/CASA, the following are the critical details and people that made it happen in the 1980s. Monroe County received a seed grant of approximately $10,000 from Eli Lilly, awarded through the national bar association, to develop the Monroe County GAL/CASA Program. Commissioner Iris Kiesling was excited about the program and we went together to the not-for-profit Family Services Association to ask them to administer the project. They agreed. They provided space, materials, and some administrative oversight. We hired a part time director. We developed training materials for the volunteer lay people to serve as CASAs and for volunteer lawyers that would assist them in the courtroom. The first class of CASAs (called GALs initially), was trained in 1984. Iris had ongoing involvement in the program, and was that vital link to county government and necessary funding sources.

My earliest recollections of CASAs in my courtroom was – WOW this works! The CASAs were prepared and informed in the courtroom. They filed written reports about each child they represented prior to the hearings. I remember the reports as being thorough and accurate, but I am sure we went through a natural process of determining what was important and how reports should be organized to maximize the busy schedules of the volunteers, attorneys in the courtroom, and the Judge. For sure, the volunteers were never “fish out of water” in the courtroom. They understood the needs of children as well as anyone in the courtroom and never had any trouble expressing themselves. Without “legalese”, they were able to state in simple facts what was needed for each child. The volunteers were not constrained by government funding or other issues. Equally important the volunteers were not unrealistic in setting the parameters of what children needed. The volunteers were often able to work more cooperatively with parents and obtain better efforts toward reunification, than the Welfare Department caseworkers.

What motivated me in the beginning and throughout my career, as a Judge in juvenile law, was the commitment of our CASAs and their ability to bring the critical facts about child and parents into the courtroom. A judge cannot function without this kind of unbiased, accurate, and timely information. Also what was always unique about the Monroe County program was the use of staff (only part time/and certainly not well paid in the beginning) to work directly with each volunteer to outline the work that needed to be done for effective advocacy, and to be present in the courtroom to help the volunteer CASA with questions from the Judge, or unexpected circumstances that came to light on hearing day.

What is the biggest change you have seen with the program since the 1980s? 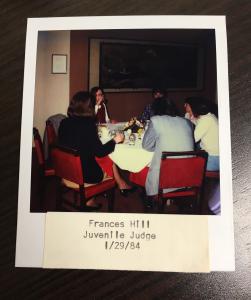 Judge Hill at the 1984 Recognition Dinner

FH: Since the humble beginnings of the Monroe County CASA program, much has changed. In 1989, the State GAL/CASA Agency was created as a part of state government. The Agency provides some funding for county programs, sets standards, and provides educational training and support to the local CASA programs. Later on, the CASA program established itself as a 501 (c) 3 not-for-profit entity. Although CASA receives some State and court funding, it has a team of dedicated development staff and IU interns that work on fund raising, community awareness, and CASA support. The Monroe County Staff has grown and the number of CASAs has increased to around 150. The project has trained attorneys to serve as counsel for CASAs in difficult CHINS cases. State and Federal law has continued to change with major federal legislation in 1984, 1997, and most recently the Families First Act: all requiring the State to make reasonable efforts toward family reunification, but to seek permanency alternatives for the child when reunification is inconsistent with the best interest of the child. Staff has enthusiastically kept abreast of changes and “constantly pushes the envelope” to be sure that resources and judicial processes meets the best interest of our children.

How have you stayed involved with CASA over the years?

FH: My obvious involvement with our CASA program over the years has been as the beneficiary of the CASAs in my courtroom. They have been unbelievable!! I could tell you story after story of CASAs who: (1) brought critical information into the courtroom that was not otherwise provided to me and made a sincere difference in how the court handled a particular case, and (2) enabled me to understand the critical needs of a child I had not previously appreciated. Also, I have had the pleasure to help with the training materials and presentations for volunteer attorneys. What a great group of lawyers. In the old days, I remember the unbelievable effort of the CASA staff, particularly Deb Dunning, copying pages and pages of statutes and training articles for attorney training binders. I also remember working with Kristin Bishay and Board President Bob Lebien on Bob’s goal to modify state child protection statutes. Bob was the most humble and sincere volunteer advocate for children I ever met. What an honor it was to work with him. My goal for my retirement years is to meet with CASA staff on a monthly basis to give them legal information as the need arises in their cases. The role of the CASA is not as a lawyer – but in order to be good advocates, the CASA and the CASA staff have to understand the law and how it impacts what will happen to children and parents in the juvenile law process. My goal is to save the CASA and CASA staff time and confusion, by providing basic information on the law relevant to hearings, evidence, and rights. Finally, in my retirement years I hope to spend some fun time with CASAs and retired staff. These are the kind of people I would love to hang out with. Already I have had an invitation from 5 CASAs to teach me bridge – and they say they will love me even if my bridge is terrible.

Do you have a hidden talent or fun fact that most people don’t know about?

FH: No special talents or fun facts, but I hope to learn how to play bridge one day. And like all grandmas I love to spend time with my grandchildren. Four and ½ year old Molly can ski and hopes to be a downhiller in the 2030 Olympics. Nine-month-old June Francie is cute as a button, but like her grandma/Nana has no special talents so far