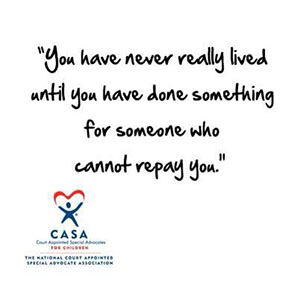 I was just thirteen when I met my CASA. Our first contact was when she and my case worker came to see me at the Indiana United Methodist Children’s Home. They were waiting for me when I returned to the dorm after school. I really liked my case worker and trusted her and hoped the CASA would be okay too. I was the youngest girl there and learning stuff from the older girls, a lot of them felons. I was really unhappy and just wanted out of there right away.

My mom had neglected my little brother and me for several years so we were taken in by our uncle, my mom’s brother. He adopted us, but after six months he couldn’t cope with both of us so he kept my little brother and told the court that he wanted to be only my uncle. My behavior was pretty bad and I ended up at Meadows Hospital. I already lived in Florida where I was born and then Alaska where living with my mom became impossible — no food, no one at home, and just me looking after my baby brother. Then I was sent to Methodist home to attend school, get healthy and improve my behavior.

Both my new CASA and case worker thought I should be moved as soon as a good placement could be found. I was taken to Evansville where I lived in a group home. Since I had attended school off and on I was really behind in most everything. Plus that I was angry, unhappy, and hated the restrictions put on us. We had to learn table manners, how to behave in a restaurant, good health habits, and other necessary everyday things. Someone was always with us no matter where we were, but after two years of lots of therapy and tutoring for school subjects I finally got my wish to be with a foster family in Evansville.

In the beginning this was good — I was fifteen and in high school and living with a foster mom and dad who had a couple of kids and a dog. This was freedom for me and I did stuff that didn’t meet the behavior standards of the school so I was asked to leave and was transferred to another high school. Things in the home were okay for a while, but then the dad did some things to me that he should not have so I was moved to a second foster home in Evansville.

Again this started out okay — I was sixteen, in a new high school where I had a boyfriend and a couple of close girlfriends and a cell phone. I completed the school year in spite of cheating on a test. After school was out things weren’t going very well. I was working ten hours a week, helping out around the house, and babysitting the four year-old boy. We came to Bloomington for a court review hearing in late August when the foster mom told my new case worker and CASA that she was not taking me back with her to my foster home. She hadn’t said anything to me before then that she didn’t want me to live with them anymore and was not taking me back to Evansville.

I was, at seventeen years-old, brought to Bloomington a couple days later and placed in another foster home with five younger foster kids. School started the next week so the foster mom took me clothes shopping, got me registered for an alternative school, gave me the guidelines for living with her family and treated me more like an adult. I had chores, had to study, attend therapy, and received lots of her attention.

It took a couple of years for me to graduate from high school … I couldn’t pass all the ISTEP exams so I have a certificate. I had planned to attend Ivy Tech and had financial aid arranged. But I spent ten days in the hospital beginning a couple days before school was out and felt so wiped out afterwards. I was no longer a ward of the court so I had to move in with my real mom … I really am not sure of my next step.

I’ve had several case workers and you know about the foster homes, but my CASA was the only one who continued to be here for me during these years. She remembered my birthdays and Christmases … she is a good friend. 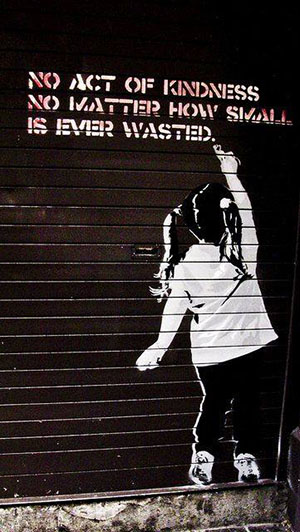 This is an example of a typical CASA case. The story is fact-based, but has been compiled from details of multiple cases in order to protect the confidentiality of the children and family members.

An infant girl is found in her crib by a babysitter, not breathing. The baby’s parents had left an hour earlier to go to work and no one else had access to the baby’s room. There are four other young children in the home. The babysitter calls the police and the other four children are temporarily placed in foster care for their protection.

The baby’s death is determined by law enforcement and Child Protective Services to be non-accidental. The parents are distraught, but neither of them takes responsibility for the baby’s death, and they do not believe that their other children are at risk. The case enters the court system, and the judge appoints a Court Appointed Special Advocate (CASA) to advocate for and protect the interests of the surviving children.

All four children have many issues to deal with: their removal from their home, the death of their sister, the confusion of what is happening to their family, and the sadness of all of the sudden losses. Each child responds in his/her own way, presenting many challenges for the foster parents, the Department of Child Services case manager, and the service providers involved in helping the family. The CASA volunteer works closely with all of those people, and especially the children. He helps to ensure that each child is receiving services tailored to that child’s particular needs, and that as the case progresses and the needs of the children change, the services that are offered change, too.

One child, a six year old girl, has many difficulties as she begins school that fall. The CASA works closely with the teacher and the school social worker to assess her needs and design a program that will give her the best chance of success. Within a couple of months, she is doing much better — able to focus and begin to learn, and able to interact productively with her peers.

Another girl, 3 years old, is exhibiting unexpected behaviors and is no longer able to sleep through the night. Her sleep deprivation is making her behavior extremely difficult to control and the foster parents are nearing the end of their rope. The CASA works with the DCS case manager to formulate a plan to address the root cause of her behavior through play therapy, and a behavior management plan for the foster parents so that the girl can be successful in this foster home and not have to endure another move. The CASA also advocates for respite care for the foster parents to give them an occasional break from the demands of caring for four young children with very painful issues.

The case remains in the court system for more than two years, and over that time, the CASA has helped to ensure that the perspectives of everyone involved with the family — DCS, therapists, doctors, foster parents, teachers, social workers, and so on — is taken into consideration by the judge as decisions are made, and that the interests of the children remain at the forefront of everyone’s mind every step of the way. The parents have never admitted responsibility for the death of their youngest child and have not been willing to participate in the family reunification services that were offered. It is determined that it is in the best interest of the children to be adopted so that they can move forward with their lives. In the end, all four children are adopted as a group by a strong and loving family.