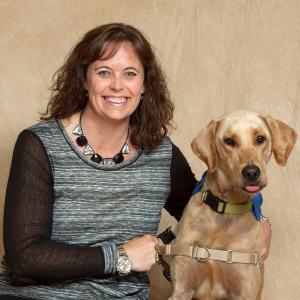 Without Tony, a 7-year-old child in Porter County might not have had the courage to testify against an older child accused of molesting her.

Without Tony, anxiety might have kept a woman from testifying against the man she accused of multiple incidents of domestic violence — testimony that sent her abuser to prison.

“I don’t know if we would have gotten her through the deposition (without him),” said Cheryl Polarek, a deputy prosecuting attorney with Porter County. “Once he was there with her, she really relied on him.”

Tony isn’t a counselor or a lawyer, but he has become an important member of the Porter County criminal justice team.

Tony is a “courthouse dog,” a trained facility animal that provides comfort and support for victims and employees dealing with the difficulties of the court system. Monroe County Court Appointed Special Advocates (CASA) is in the process of bringing a similar program to the local justice system.

“He has completely reformed what we’re trying to do here,” said Polarek, who is also Tony’s primary handler. “We’ve gotten some kids to open up to him that wouldn’t to the adults.”

Not a new idea

Courts in the United States have used facility animals during child witness and victim depositions and testimonies for at least a decade, according to Celeste Walsen, the executive director of the Courthouse Dogs Foundation in Seattle, Washington.

Historically, facility dogs have been used in hospitals to support patients in therapy, and in classrooms to assist special needs students. A growing body of scientific research on therapy animals points to the benefits of human and animal interaction to calm anxieties and reduce stress, which can be particularly helpful in a courtroom setting.

“The function of the dog is to help a vulnerable individual feel comfortable enough to articulate what happened to them or what they’ve seen,” Walsen said. “When you’re a forensic interviewer or even a CASA volunteer, you need to get information from the child to do your job, but you don’t want to stress the child. It makes all the difference in the world to have a professionally-trained dog that can accompany children.”

A courthouse dog is trained to sit quietly at the feet of someone on the witness stand while they are questioned about troubling events. Dogs like Tony are trained not to react to the person’s emotions, which provides feelings of safety and protection for witnesses and victims of violent crimes, sexual assault, domestic violence and abuse.

Tony can also provide comfort outside the courtroom. One of his commands is to tell a child a “secret.” During a deposition before a trial, Tony will put his wet nose to the child’s ear and make a low noise as if talking. Then, Polarek will tell the child they can tell Tony a secret.

“A lot of time if they don’t want to tell me what happened. I’ll say, ‘Well, do you want to tell Tony?’” Polarek said. “They can be on floor with Tony, petting him while they talk.”

While television dramas like “Law and Order” might depict a child giving testimony through a closed-circuit television system, in reality, child witnesses and victims are most often required to take the stand to testify, Polarek said. And to prepare for trial or deposition, children often have to visit her office several times and go over in detail the traumatic events that led them to court.

Since Tony the courthouse dog has started working with child victims, however, the once-threatening building has become a place to visit a furry friend.

“I don’t represent anything positive for them,” said Polarek, who prosecutes sex and violent crimes in Porter County. “Once they meet him, they want to come back and see him, and that makes it so much easier. It’s not about what we’re talking about. It’s about seeing him.”

As part of the class, participants form small groups and design a project to improve the community or fill a need not currently met by another organization, nonprofit or government entity.

Shannon and her five other group members researched how courthouse dogs like Tony have been used to help victims and criminal justice employees in Indiana and across the country, and presented a plan to the CASA board of directors and the Monroe County board of judges to purchase such a facility animal for appropriate use in courtrooms.

“A lot of people are not familiar with the concept,” Shannon said. “Every time we talk about it, people say, ‘A courthouse dog? A facility dog? Is that like a therapy dog?’”

Like Tony, the dog Shannon hopes to purchase for CASA’s use will come from the Indiana Canine Assistant Network, the state’s only Assistance Dogs International-accredited dog training nonprofit. ICAN service dogs can be used to work with autistic children to help them learn effective communication methods, help diabetic patients manage their disease and identify impending health problems, and help people in wheelchairs live more independently.

“It’s just miracles that come out of these situations,” said Denise “Dino” Sierp, director of development and outreach for ICAN. “They say dog spelled backward is god, and I believe those dogs are gods.”

Unlike service animals, facility animals are trained to obey commands from multiple individuals, allowing for broader use in a setting like a classroom or courtroom. Dogs start training as puppies and work with handlers for nearly two years before starting work as a service or facility animal. The animals are trained at correctional facilities for much of that time, where they are taught commands and skills to work in any field of service or facility.

“You’re talking about a dog that’s being trained by people within the court system to serve other people perhaps going through the court system,” said Louis Malone, shelter care coordinator for the Youth Services Bureau of Monroe County, and a courthouse dog project group member. “It’s this full cycle of making this a better world for people who are a part of something that’s quite difficult.”

In May, the board of judges unanimously approved CASA’s initiative to purchase the dog for use in their courtrooms. There is up to a three-year waiting list for ICAN dogs, as demand for service and facility dogs is high, Sierp of ICAN said. In that time, CASA also hopes to form partnerships with other local groups who work with children in stressful situations to utilize the trained facility dog.

“All of us were super enthusiastic about it because it’s such a wonderful opportunity for everyone involved,” said Valeri Haughton, Monroe Circuit Court presiding judge. “Except maybe for the attorney and judges that want to be there, I think court can be a pretty stressful place to be for most people. I think (a courthouse dog) can be a really good calming effect for everyone involved.”