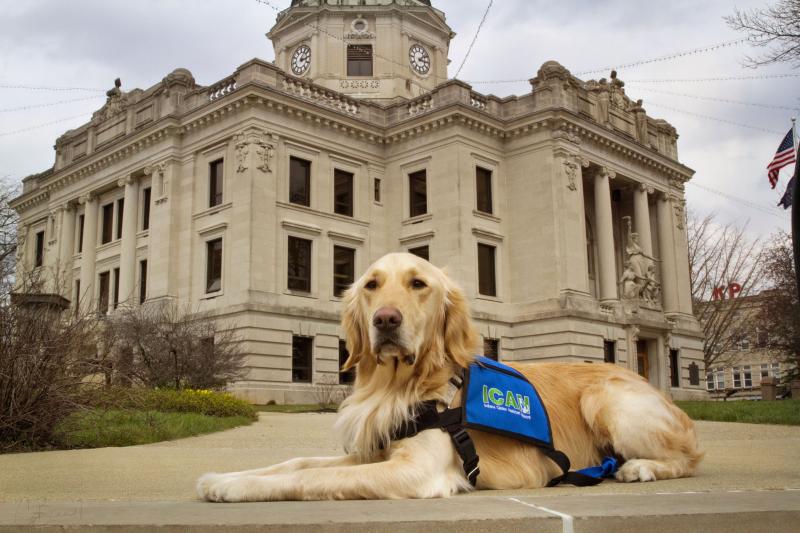 Anyone who has had a dog will tell you the emotional impact they have on people. Our dogs are always there for us, whether we are celebrating good news or going through a difficult time. A dog can lend the emotional boost we need to get through these tough times. The experience can be frightening and emotionally taxing for children going through the court system. Having to recount the terrible things that have happened to them, let alone face the people who did them, can make a child feel unable to give vital testimony. That’s where facility dogs come in. In recent years, specially trained dogs called facility dogs have been allowed to accompany children and other vulnerable witnesses into the courtroom to help provide a sense of calm. Indiana alone currently has 37 of these dogs, including one in Monroe County.

Rules for Facility Dogs, and the Humans Around Them

To start working in a courthouse, facility dogs must meet the high standards of Assistance Dogs International (ADI)Assistance Dogs International (ADI). Here in Indiana, the Indiana Canine Assistance Network (ICAN) is one organization that makes sure facility dogs keep up with their training and pass annual public access tests. Passing these tests is no easy task. Only between 50-60% of dogs that enter the program end up in an actual role as a facility dog. The dogs spend the first couple years of puppyhood learning general etiquette as well as about 40 commands. After this they enter various training programs before being certified as facility dogs.

In addition to the many rules facility dogs are taught, there are also special rules that humans should know and respect when working with or around facility dogs. It is important to remember that even though facility dogs are cute, furry friends, they have a very important job to do. First and foremost, listen to the handler. These are the people that know the dog best, so don’t take it personally if they tell you “no”. It can also be tempting to distract the dog by trying to get its attention (kissing noises, high-pitched voices, calling their names, etc.). Although the dogs are very well trained, they still require a lot of focus to ensure that they can fulfill their roles, so make sure you aren’t causing any distractions. Finally, don’t tell the handler that it is ok for the dog to misbehave. Facility dogs have strict guidelines for training and behavior. If the handler says it isn’t ok for the dog to be acting a certain way or exhibiting a behavior, there is a reason.

Monroe County CASA’s  facility dog is Jordy. After completing his rigorous training with his handler, Tia Arthur, in 2016, Jordy helped make Monroe County CASA the first Indiana-based CASA program with a facility dog program. He is one of only 269 facility dogs working in courthouses across over 3 dozen states. As mentioned before, Jordy’s training is frequent and rigorous, making him a true professional. You won’t see this dog chasing after a squirrel on a walk or barking at passersby out the front window.

Since Jordy’s introduction to his role at Monroe County CASA, he has helped countless children face their abusers in the courtroom. In addition to the 170+ court depositions Jordy has assisted in, he helps CASA to spread awareness about child advocacy and also visits children in residential treatment facilities and the Monroe County Youth Shelterto introduce them to CASA. Jordy serves as a great example of the positive impact that facility dogs can have not just on Monroe County CASA, but on programs just like it all over the country.